Just days after the release of the Federal Government’s electric-vehicle (EV) policy, a new study from global sustainable engineering design and consulting group Arcadis reveals how far Australia still lags other countries in the transition to EVs.

In Arcadis’ Global Electric Vehicle Catalyst Index 2021, which ranks 12 countries1, including Australia, and the US states of New York and California against three criteria considered critical to accelerating the transition to EVs, Australia ranked last or second-last across all measures.

The criteria measured in the report were Government leadership and incentives, EV market maturity, and EV charging infrastructure.

Australia’s performance was the only jurisdiction assessed as Poor (on a four-point scale from Poor to Excellent) in each category.

While Australia ranked last on the measure of Government leadership and incentives – factoring in subsidies and incentives for EV purchases, fuel emission standards and mandated end-dates for petrol and diesel cars - Arcadis’ report was compiled just before last week’s EV policy announcement by the Federal Government. The policy includes public funding for new charging infrastructure but no new EV subsidies or regulations.

Arcadis’s Global President – Mobility, Greg Steele, who is based in Australia, said that although the Government’s EV policy lacked detail, the planned spending on charging infrastructure would likely lift Australia’s ranking from poor to fair in this measure of Government leadership and incentives.

“Recent announcements aside, the EV Catalyst Index underlines how much ground Australia has to make up in the transition away from petrol and diesel cars,” Mr Steele said.

“We know that Australia lags in the EV transition and this report breaks down why.

“It starts at the top – most governments around the world see the future is EV and that’s reflected in the policy mix, with subsidies or incentives for EV purchases and regulations like fuel emission standards that make petrol and diesel cars less attractive.

“Other countries are also much closer to the critical mass of EV market penetration and charging infrastructure that accelerates the transition. It’s a virtuous cycle because that encourages car manufacturers to make more EV models available to consumers.

“Unfortunately, Australia lacks those catalyst factors at present. A key issue is a lack of policy cohesion. NSW and some other states are moving rapidly ahead and while the recent commitment to EV transition at a national level is welcome, it needs to go further,” he said. 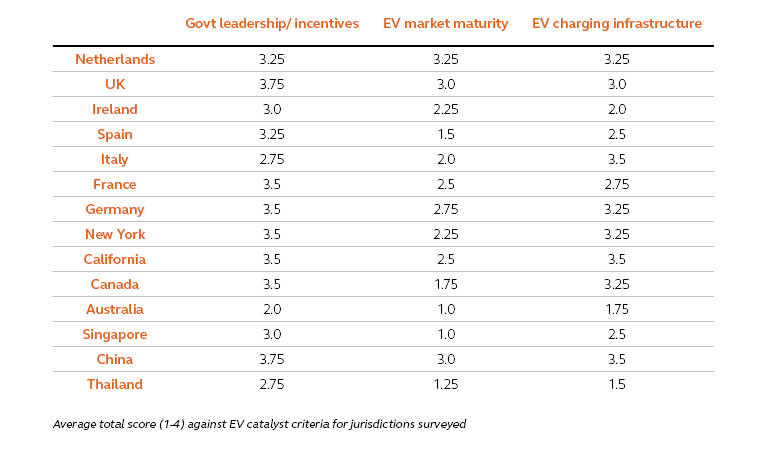 According to the study, in Australia there are currently 10 EVs per public charge point and 30 EV models available, and there will be an estimated 20 EVs per 1,000 people in 2030.

Italy has 3.1 EVs per charge point, Spain 2.3 and Germany 7. Backed by a comprehensive suite of EV incentives, the states of New York and California estimate they will have 230 EVs and 120 EVs per 1,000 people respectively by 2030.

Mr Steele said: “Without a clear policy framework to encourage the transition to EVs there is little incentive to shift from petrol and diesel and EVs will remain expensive. The opportunity is for the Federal Government to lead a co-ordinated national approach that triggers the virtuous cycle – with EV policy leading to EV market maturity and infrastructure. Maintaining the policy impetus and bringing incentives into the mix, could see Australia quickly put itself on the map as an attractive destination for EV makers.”